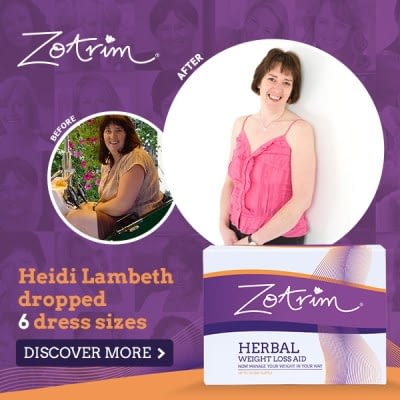 Review: Zotrim and Zotrim Plus

Zotrim and Zotrim Plus work by controlling hunger and helping you feel fuller for longer. It also helps you to be more active and to burn more fat during exercise.

Zotrim itself comes in tablet form. Zotrim Plus comes as a powder to be made into a pleasant tasting orange & mango flavoured drink.

Zotrim is natural and safe having been on the market for over 15 years with acceptance by the UK food agency and medical agency.

What are the Zotrim ingredients?

Zotrim contains the extracts of three South American plants which have longstanding traditional uses. It is the unique combination of these plant extracts which give Zotrim its powerful effects.

Zotrim Plus also contains the dietary fibre inulin extracted from chicory plants. This enhances the effect of Zotrim and also provides a healthy dietary fibre supplement. 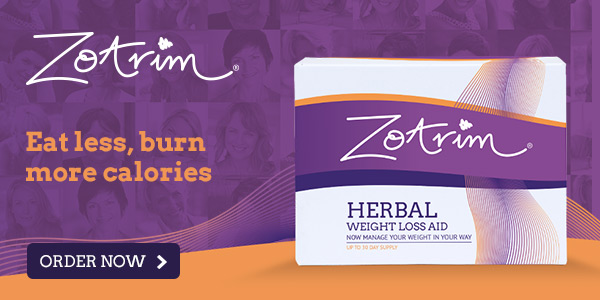 The ingredients in more detail:

Yerba Maté leaves have long been used in South America to help reduce hunger and fatigue. Higher in antioxidants than green tea, it has an invigorating effect and also increases energy use during exercise.

This means you’ll not only feel more active, but the exercise you do will be even more beneficial because you’ll shift even more of those fat stores.

Further research has shown Yerba Maté even has the ability to prevent the development of new fat cells, meaning it can help prevent further weight gain.

There is a reason Guarana is a key ingredient in energy drinks; it contains more caffeine than coffee. Along with its highly stimulating effect, the caffeine in Guarana raises your metabolism, causing more fat to be released from cells into your bloodstream to be burned for fuel.

Historically used in traditional herbal remedies, Damiana is known to have a gentle mood enhancing effect. So if you’re prone to emotional eating, you may find it that bit easier to resist the urge to resort to food when things get tough.

But the true weight loss benefits of Damiana are unlocked once it’s blended with Guarana and Yerba Maté to create the unique Zotrim formula; a combination which gives you greater power over your eating habits.

It’s well known that caffeine can improve energy levels. The added caffeine in Zotrim will help invigorate and energise you, as well as help in increasing your alertness and concentration levels – which makes stepping up your weight loss by getting more physically active a lot less effort!

Vitamin B3 and Vitamin B6

A crucial part of a healthy diet, B vitamins play an important role in converting the food you eat into energy.

The added vitamins B3 and B6 in Zotrim support a normal, energy-yielding metabolism and help reduce feelings of tiredness and fatigue; a common experience when cutting calories from your diet.

Inulin, a key ingredient in Zotrim Plus, is a soluble dietary fibre extracted from chicory plants. It acts as a prebiotic, providing food for the healthy probiotic microbes in our colon (part of our gut).

This is very important for our health and wellbeing, not only in maintaining gut health but also in affecting out immune system and is an important

aspect of weight management. Each serving of Zotrim plus provides 5 grams of insulin making an important contribution to the 25h of dietary fibre we are recommended to eat each day.

What is the evidence that it works?

Zotrim and Zotrim Plus help you to eat less foods and stopped eating 3 minutes earlier than those who didn’t take Zotrim.

When Zotrim Plus was tested people ate 200 fewer calories on average: a 27% reduction!!

Zotrim and Zotrim Plus make you feel fuller for longer

Zotrim and Zotrim Plus make saying ‘no’ to snacking easy

In a group of 73 overweight healthcare workers, 65% said they often felt hungry and snacked too much between meals. Only 15% said this after taking Zotrim tablets for 4 weeks.

Zotrim and Zotrim Plus help you get more active

The invigorating effects of Zotrim’s ingredients Guarana and Yerba Maté are well known, and caffeine is widely recognised for improving alertness. Evidence from double-blind studies on exercise performance found that caffeine improved performance by 12%.

Zotrim and Zotrim Plus increase the beneficial effects of exercise

Those given one of the key Zotrim ingredients – Yerba Maté extract – one hour before exercising used 24% more energy derived from fat than those taking a placebo, meaning more stored body fat was used as fuel to power their workout.

Moreover, Yerba Mate has also been shown to stop the formation of new fat cells.

Although it’s most effective when following a healthy diet and exercise program, people taking Zotrim tablets lost ten times more weight than those taking a placebo without any special diet or exercise plan.

Zotrim and Zotrim Plus outperform prescription drugs in tests

Compared to a placebo, Zotrim tablets achieved a greater and faster rate of weight loss in trials without a diet than three major prescription drugs did with a calorie controlled diet.

This is our fina Zotrim Reviews. I hope you get the useful tips throughout this post. Thanks for reading.