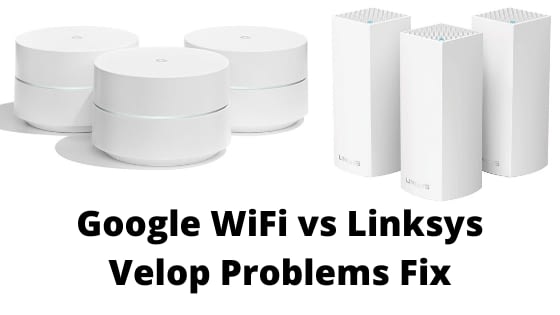 Hey, What’s up, guys? It’s me Sohel here again. I want to do a quick and effective review today. Giving you an update on the situation with the Google Wi-Fi testing that I was doing.

Google Wifi Problems vs Linksys Velop Problems and How to fix?

I had some of the popular mesh wireless systems that I have compared them and kind of slammed Google Wi-Fi because I had a few issues with it. So the problem that I used to be having was that I was getting really slow speeds at certain points.

During my testing and I wasn’t quite sure why it was happening. Google actually wanted to address some of the concerns and see if they can figure out what was going on with the Google WiFi system. After testing this out what I’ve gathered is that if I’m connected to the wireless network for maybe an hour or so I start to see slower speeds and the only way that I can get faster speeds out of it is if I disconnect from the network and reconnect now.

So when this issue happens I’m getting anywhere from 20 to 60 Meg’s a second now again. This isn’t a big issue considering that’s fast enough for pretty much any device. However, considering that I know it’s a bug or it’s an issue I just wanted to point it out now.

It seems that the problem is not as bad as it was before so I’m definitely getting much faster speeds before I was getting like two-three four Meg’s a second now. I’m getting maybe like 20 or so so it’s definitely better but I did just want to give you guys an update on that situation.

The other thing I want to talk about is the Linksys Velop. The problem I had with lakes as developed was that I had issues keeping the mesh units connected to each other so for some reason the mesh access point would keep losing connection to the main router.

After fighting with that for a while I finally got them to communicate but after I fixed that the next problem I had was that the devices kept dropping off of the network. So I have a few devices connected to the network and for no reason, at all, they would just disconnect. So after a little while, I got frustrated with that enough that I just gave up now.

I would consider doing some more testing with Linksys to develop just to see if maybe that was an anomaly, maybe it was a defective unit. I’m not sure if I can get my hands on it again. I work instead of doing a full review but that’s pretty much it guys again.

Where to buy Google WiFi?

You can purchase Google WiFi from Google store. Also, you can buy this product from Amazon, BestBuy and if you are living in Bangladesh then try to buy on Bdshop.com

You can consider yourself lucky if there is no issue with your Google WiFi device. I have seen a lot of people say that they love it, they don’t have any issues. I don’t want you to think that I’m being paid by any other company or anything like that. I really doing unbiased reviews here and I really want Google Wi-Fi to work so I’ll give you guys another update once.